Thanks to "anticipated" snow, the kids and I were released from school early on Thursday. As anticipated, the snow began around 2:30 and continued into the night. The next morning we woke up to a winter wonderland (well for Georgia this is a winter wonderland). No school on Friday! Woo Hoo!! 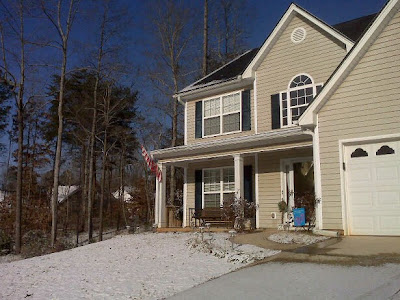 Snow on the house. 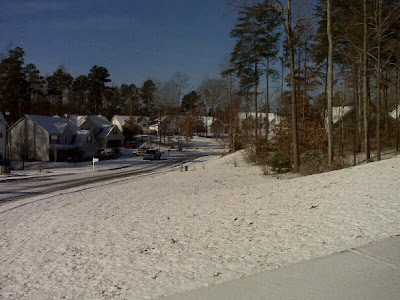 Snow in the front yard.
After Lainey laid down to take a nap, the boys and I went out to play in the snow. We played for about 2 hours. Thanks to our ski bibs, everything stayed warm except our face! We had to play as much as possible because we may not get another snow day in Georgia this year! 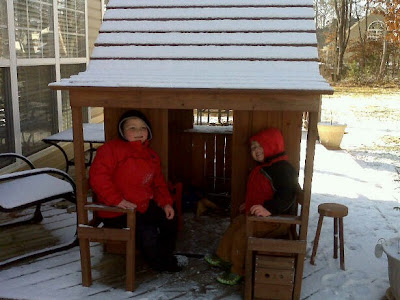 The boys playing in the playhouse. 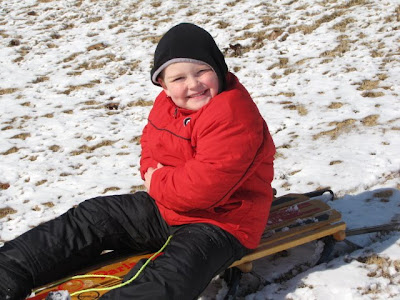 Logan on the sled. 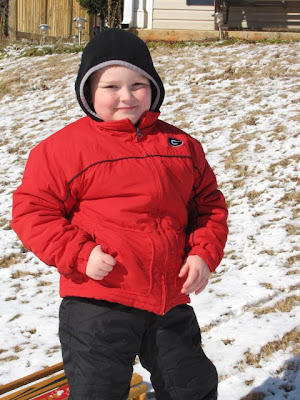 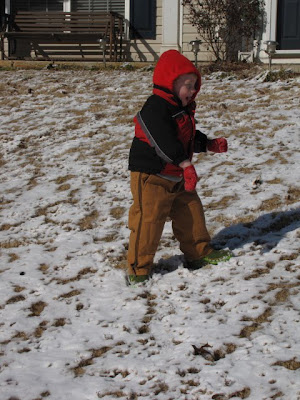 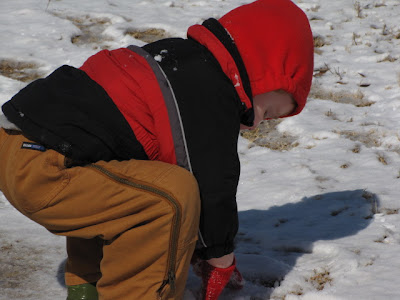 Liam trying to bend over but having a difficult time due to the numerous layers of clothing! 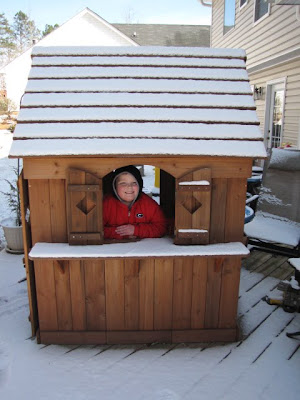 Logan in the playhouse. 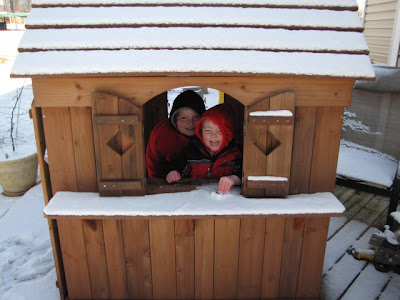 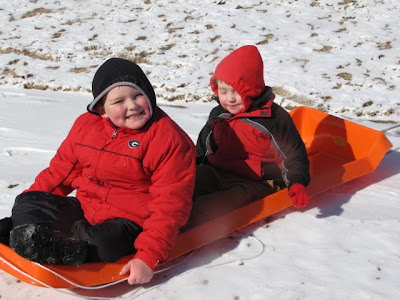 We had a blast and hope we have another snow day this year!!
Posted by The Smithson Family at 4:33 PM

We ended up having five snow days here this week and I loved the extra week of vacation! It's beautiful and looks like you had a great time.

Chengdu home on this orchid,cheap shoes blog 2010, flowering a few days ago. . Feeling a little excited,hair straighteners, do not understand why, because I feel the general orchid flowers are opening a bar many years while this orchid is a loved one on the place. . . I leave it at home,wedding dresses 2010, good,Ed Hardy, to irrigation,cheap nfl jerseys, it ~!

Hey Smithsons, come on, surely it can't still be snowing over there? More updates please...

You have an amazing blog, it is really very awesome, if you’re interested here is the link to my blog of poetry, it would be awesome if you could check it out and follow if you like.

Hoping you have a wonderful week filled with inspiration and laughter,
Grant-Grey

hi, you have nice blog.. u can view also mine..http://akoniwares.blogspot.com

THE U.S. CITIZENS HAVE THEIR BRAINS SCRAMBLED VIA FLUORIDE IN THE WATER & ALL THE ASPERTAME THEY CONSUME IN POP DRINKS, BUT THERE IS MORE.....

You see, Bush Sr., & Jr., Clinton, Regan, Carter, Obama, Ford...ALL these presidents are in what is dubbed a SECRET SOCIETY called The Moloch Axis Demoniacs (i coined the phrase myself...Dr. A.P. and i don't use my full name because WHO knows WHAT sinister crap they'd do to me IF they found out?) or M.A.D. for short.

These people, and there’s obviously more of them (Cheney, Rumsfeld etc.) than the ones mentioned, control KEY positions not just in government, business, society etc. They are GRADUALLY erroding MORAL/FAMILY VALUES in society. SO gradual that it's like hairloss! You see it ever so slowly and you have to be a keen eye to boot!

For example, women in the workforce...they go to work so WHO takes care of the kids? Some goofs getting minimum wage who could care less about those kids. Family split apart because NOW both parents work and the cost of life itself purposely increased to perpetuate this separation. Kids grow up with NO moral/family values. Repeat this a few generations and before you know it, you have mindless zombies that don't know RIGHT from WRONG! Easily programmable to get in debt, be anti-christ-like etc.

Also, the coming mark of the beast 666. Remember HOW it all used to be ca$h only? Then they introduced checks, then credit cards to get yourself in serious financial troubles, then ATM cards, and now that STUPID SWIPE-PASS card. What is the purpose of all this? To get people broken down enough and stupid enough through putting FLUORIDE in the drinking water and ASPERTAME in soda drinks/pop cans so we ALL can accept the 666 chip. So NOBODY can buy or sell or own ANYTHING lest he has the mark of the beast (anti-christ) which is 666.

I can go on for days & days as to the subtleties and more examples but i think you all SEE the points i make here. It's all SUBTLE and GRADUAL negative changes day in & day out that these M.A.D. demons (because they are demonic and have placed their trust in demons in exchange for their souls and material possessions here on earth) are passing into laws in Canada, USA, UK, SPAIN, FRANCE etc.

beautiful blog..pls visit mine and be a follower.. thanks and God bless..

Your job as a future mother is to learn the god's ways and to help your child understand despite the negative reinforcement and conditioning of today's society. Without consciousous parents the child will have no hope, and may even exaserbate their disfavor by becoming corrupted in today's environment.
Your ultimate goal is to fix your relationship wiith the gods and move on. You don't want to be comfortable here, and the changes in Western society in the last 100 years has achieved just that.
1000 years with Jesus is the consolation prize. Don't be deceived into thinking that is the goal.

The gods tempt people for which they are most weak. Artificial Intelligence will create desire in people's minds for the following sins:::
1. Alcohol
2. Drugs
3. Preditory "earning"
4. Homosexuality
5. Gambling
6. Something for nothing/irresponsibility (xtianity)
7. Polygamy/superiority over women/misogyny (Islam)
Much like the other prophets Mohhamed (polygamy/superiority over women/misogyny) and Jesus (forgiveness/savior), the gods use me for temptation as well. In today's modern society they feel people are most weak for popular culture/sensationalism, and the clues date back to WorldWarII and Unit731:TSUSHOGO, the Chinese Holocaust.
It has been discussed that, similar to the Matrix concept, the gods will offer a REAL "Second Coming of Christ", while the "fake" Second Coming will come at the end and follow New Testiment scripture and their xtian positioning. I may be that real Second Coming.
What I teach is the god's true way. It is what is expected of people, and only those who follow this truth will be eligible to ascend into heaven as children in a future life. They offered this event because the masses have just enough time to work on and fix their relationship with the gods and ascend, to move and grow past Planet Earth, before the obligatory xtian "consolation prize" of "1000 years with Jesus on Earth" begins.

The Prince of Darkness, battling the gods over the souls of the Damned.
It is the gods who have created this environment and led people into Damnation with temptation. The god's positioning proves they work to prevent people's understanding.
How often is xtian dogma wrong? Expect it is about the Lucifer issue as well.
The fallen god, fighting for justice for the disfavored, banished to Earth as the fallen angel?
I believe much as the Noah's Flood event, the end of the world will be initiated by revelry among the people. It will be positioned to be sanctioned by the gods and led for "1000 years with Jesus on Earth".
In light of modern developments this can entail many pleasures:::Medicine "cures" aging, the "manufacture" of incredible beauty via cloning as sex slaves, free (synthetic) cocaine, etc.
Somewhere during the 1000 years the party will start to "die off", literally. Only those who maintain chaste, pure lifestyles, resisting these temptations, will survive the 1000 years. Condemned to experience another epoch of planet's history for their ignorant pursuit of xtianity, they will be the candidates used to (re)colonize (the next) Planet Earth, condemned to relive the misery experienced by the peasantry during history due to their failure to ascend into heaven before the Apocalypse.
Never forget:::It is not a house of Jesus.
If this concept of Lucifer is true another role of this individual may be to initiate disfavor and temptation among this new poulation, the proverbial "apple" of this Garden of Eden. A crucial figure in the history of any planet, he begins the process of deterioration and decay that leads civilizations to where Planet Earth remains today.

Your disease is punishment.
In your last life you did something very wrong.
My advice is a healing relationship with the gods. Don't depend or count on traditional medicine. It is a scam, just like psychology.