When it rains, it pours....and we are in a monsoon! 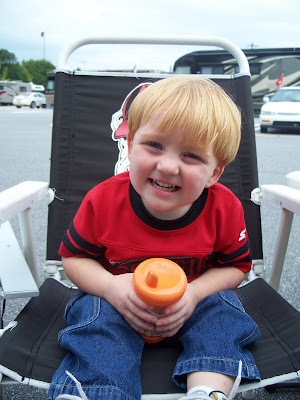 Liam tailgating at the Georgia game.

The Smithsons definitely love each other, but we have been spreading more than love! Liam had a fever of 101.4 on Sunday night, leaving us no choice but to resort to our emergency plans on Monday morning....Gigi and Papa! Thankfully they were able to watch him while Sid was at school and I was at work. How it breaks my heart to go to work instead of taking care of my children when they are sick! In all efforts to save my sick leave for a "rainy" day, I had no choice but to leave him at mom and dad's house. Fortunately we had previously scheduled an appointment with Liam's ENT that was conveniently scheduled for 3:30 on Monday! This appointment was scheduled to discuss and determine Liam's need for the removal of his tonsils. With one AHHHHHH, Dr. Stewart confirmed Liam's second case of tonsillitis in a month. He had just completed his 10 day round of antibiotics for bronchitis! We have scheduled to have his tonsils removed, a bilateral earwax removal, removal of his adenoids (which were removed last December, but are growing back in the form of scar tissue), and to place new ear tubes (this will be the third pair!) His surgery is on Wednesday, October 15th at 6:00 a.m. Hopefully this will be the answer! Dr. Stewart thinks this should solve his problems with constant ear infections, respiratory infections, and throat infections, as well as improving his speech, snoring, and constant drooling. If only it would help with Liam's anger management! 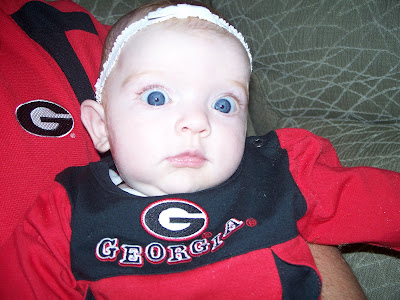 Lainey at the Georgia game!

Wednesday is also a big day for Lainey! She will be receiving the first of eight Synagis shots for the prevention of serious illness related to RSV. The home health care nurse will come to mom and dad's house to bring a digital scale and administer her Synagis shot. Two days before each shot we will call the suppliers of Synagis to report her weight. Knowing her exact wight is vital in determining the correct dosage of Synagis. Each shot costs $2300! The doctor wanted these shots to begin in September and last through April. Obviously the insurance company didn't agree with the doctor, thus the reason for beginning a month later! After an appeal from the distributors of Synagis, the insurance company agreed to continue Lainey's monthly shots through April 14th. 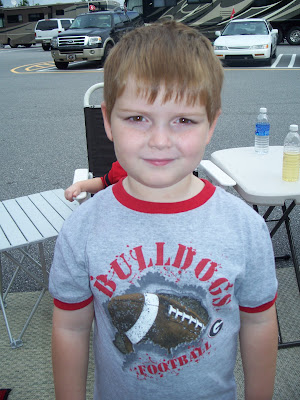 Last night Logan went with Gigi and Papa in the "big bus" to begin tailgating at "the Georgia." Around 10:30 mom called to report that Logan was complaining of a headache, had a fever, and was throwing up! At least he made it to the toilet when he felt sick! This happened to be exactly two weeks from his confirmed case of strep throat, and just four days from the completion of antibiotics! Now we are hoping Liam does not get this stomach bug which could possibly postpone his surgery. Although Logan is feeling a little better, he is still feverish as I type! 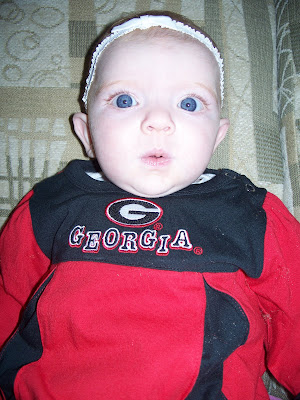 Wednesday evening when I finally got around to opening the mail, I found a packed envelope from the endocrinologist. I had blood work drawn two weeks ago and an MRI brain scan one week ago, with no call from her. It was then when I understood why she had not called me with my results! She mailed fifteen pages of test results and prescriptions. With the 3 tubes of my blood they found several things. My red blood count, hemoglobin, hemocrit, and Ferritin was low. It was determined that I am anemic, therefore I am now taking iron supplements daily. It was also determined that my vitamin D levels were low. Once a week I take 50,000 units of vitamin D. My serum prolactin level was high, so I am now taking medication twice a week to lower these levels. Neither the doctor nor I know what has caused these level to be higher than normal, therefore I will have it checked regularly. My estrogen level was also extremely low. For a female of my age, the reference range is 19 - 528 (and should be at the higher end). The test showed my estrogen level to be 7, that of a postmenopausal female with no treatment. This low estrogen level may be related to the elevated prolactin level and will be monitored through blood tests. Last, but not least, my kidney function was low. Tests on my kidney function will be performed regularly to rule out chronic kidney disease. The other tests were normal, including the MRI brain scan. I was worried they might not find a brain! 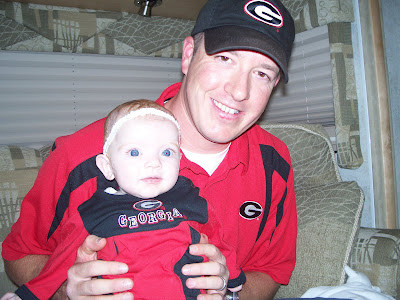 Lainey and Uncle Brad hanging out in Gigi and Papa's motor home.

On Monday Lainey will go see Dr. Caplan for her monthly visit. Maybe she will weigh 13 and one half pounds...this is my goal! She has been eating rice cereal daily, which has helped lower the number of poopy diapers we change per day! Mom and dad will watch the boys since they are out of school on Monday for Columbus Day, while my friend, Jenn, Lainey, and I go to the CF Center. I will try to report about Lainey's doctor visit and Liam's surgery on Wednesday.

Thanks again for all of your prayers! Hopefully we will get a break with illnesses, for the sake of our health and wallet! In addition to the amount we are spending on numerous doctor visits, we were just informed by Liam's daycare that the fees are increasing. We will pay an additional $40 per week beginning in November. This will bring the total to $525 per month, not including his lunch and snacks! We are thankful that mom and dad are able to watch Lainey! Daycare for the two of them would cost roughly $1100 per month. Due to this increase, Sid will be picking up a few hours on Monday and Tuesday after school. It makes it harder on all of us when Sid has to work more hours, but we just thank God that we have that as an option when times get rough! Although it is hard to see at times, God really is Good! Continue praying for us ~ especially for Liam during his surgery on Wednesday and Lainey with the beginning of her Synagis shots.

Posted by The Smithson Family at 10:13 PM