More illness at our house! Logan was out of school on Friday and Liam should have been....but who wants to take care of a 2 year old that doesn't slow down when he is sick....even when given medication that causes drowsiness?! After convincing the kids into going through the doors of the doctors office (they remembered the blood test for Cystic Fibrosis and didn't even want to go in), we soon found out that Logan had Strep Throat and Liam had Bronchitis! Two co pays and two prescriptions later, we were headed home for a weekend of recuperation.
It is amazing how hard it is to keep the baby away from the boys and even more difficult to keep the boys away from the baby!! Every few minutes Logan wanted to know if it was okay to kiss the baby, since he was feeling better! After a Saturday of not feeling well myself, being home with 3 kids while Sid was working, nursing two sick boys back to health, cleaning the house, cleaning out closets, doing laundry, and watching Georgia "blackout" during the game...I was wishing I hadn't taken the boys to the doctor(or watched the game)!! They were more than feeling better with just one dose of antibiotics and I was worn out!! Whoever had the wonderful idea of making Saturday "Go outside and Play" day on the cartoon station, did not have the moms' of sick children in mind! Although I was feeling better on Sunday, our day was just as crazy...but I managed to take a few pictures of Lainey! 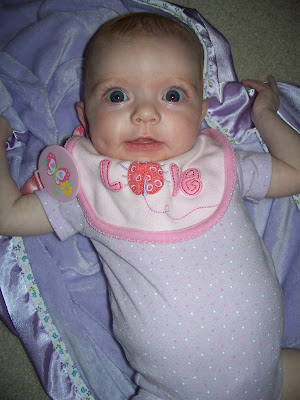 "I hope those boys don't give me what they have!"
On Monday we went to the pediatrician for Lainey's 4 month check-up. She did not have Strep Throat, but her throat was red!! We are praying that red is all she has in her throat...no germs! She weighed 12 pounds 13 ounces...that is a gain of 10.5 ounces in 13 days!! YEA!! Lainey was not very happy to have Dr. Onal checking her out...especially when he was pushing on her belly. She showed him by dirtying her diaper before he was able to check that area! Although we have seen her reach milestones quicker than Logan and even faster than Liam could have ever imagined, she refused to show Dr. Onal! She didn't want to hold her head up, roll over, be on her stomach, "talk," or grab on to his fingers! Mom and I were bummed out that she was not showing off (which is a Smithson trait), but we know what she can do and that is what counts!! After much reading and research, Dr. Onal decided it was safe...or at least that the benefits outweigh the risks...for Lainey to receive the Rotovirus orally. She did not get the first dosage at 2 months due to the precautions...DO NOT take if you have had a blood transfusion (Lainey had one at 6 days old), if you have had bowel obstructions (Lainey had for her first 5 days of life and then some), if you have had bowel surgery (Lainey had at 5 days old), and if you have digestion issues (Lainey's everyday issue). With all of these precautions, it is easily understood why we had an issue giving her the oral vaccine! Dr. Onal did a lot of reading and research, received a thumbs up from Dr. Caplan (the CF doctor), and I said I was comfortable with it, therefore she received her first Rotovirus dosage out of 3. So far, so good. No issues related to the vaccine that we have noticed. She has been running a fever, but we are contributing that to the other 4 vaccines she received! Overall, her visit was very good. Dr. Onal was happy with her progress and her unchanged status of health related to the Cystic Fibrosis. Two hours later, we were all happy...because we were finally getting out of the office! 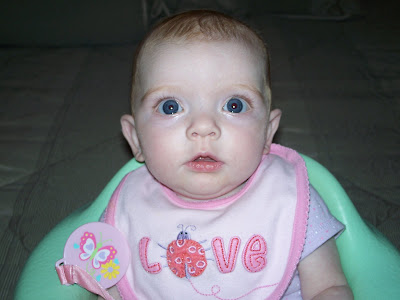 Lainey liking the view from her Bumbo!
Today at 3:30 I will be having a MRI brain scan. The endocrinologist wants to check for any tumors in the pituitary gland. In addition to the MRI, she also had blood drawn for 15 different tests (one being pregnancy, so I know the answer is "not" an issue, but I am worried about the other 14). I should know results from the MRI and the blood work by the end of the week, or the beginning of next week. For my family's sake, I hope nothing is wrong with me! I think I could handle it personally, but if someone had to take over my responsibilities, I don't know what I would do! On that note, I think I will start a manual to surviving at the Smithson household! :)
Please keep all of us in your prayers! We need good health for everyone and bad germs out of our house! Thank you for everything ~ we count on your thoughts and prayer more than you will ever know!
Much Love,
The Smithsons 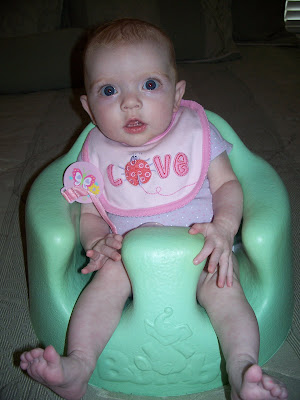 "Sitting up is way cooler than always lying down!" 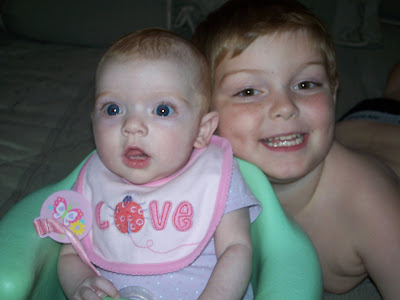 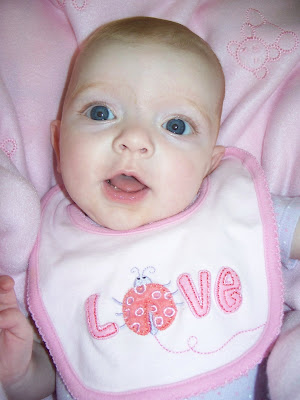 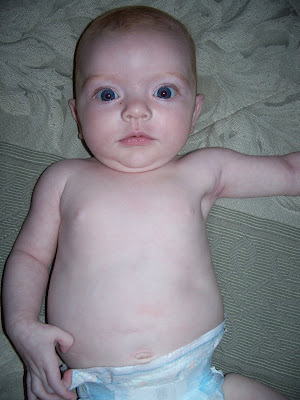 Have you ever seen a "Naked Bug?" Well, now you have! If you look closely...I mean get real close...you can see her scars from the surgery and t-tube. The scar from the surgery is about an inch above her belly button, about 2 inches long, and parallel to the top of her diaper. The t-tube scar is next to her thumb nail! The doctors did an awesome job, didn't they?!
Posted by The Smithson Family at 6:22 AM