Friday was Lainey's 11 month clinic visit. She is finally in the GREEN!!! She was 20 pounds and .02 ounces! Her length was 28 1/2 inches, putting her BMI in the 50th percentile. The antibiotics she has been taking seem to be doing the trick. Dr. Caplan said her lungs sound clear! Yea! We will begin introducing Pediasure, again. This time we will put a little at a time into her bottle to gradually wean her from the formula. I will also begin introducing a sippy cup. It is a pet peeve of mine to see kids older than 15 months drinking out of a bottle, therefore I must begin working with Lainey. Dr. Caplan said that Lainey will come back next month for her 1 year checkup, then we can begin scheduling appointments a little further apart! I won't know what do not having to go to the CF Center every month!

As for now, all of Lainey's meds will stay the same. The only change in Lainey's routine is to begin introducing Pediasure.....after she finishes the antibiotics. Dr. Caplan is unsure about introducing whole milk since it only has 20 calories and due to the milk protein allergy Lainey had when she was in the hospital. We are hoping that she continues to gain a lot of weight now that she is eating table foods. Lainey is taking a liking to french fries ~ salty and fattening ~ just what the doctor ordered! 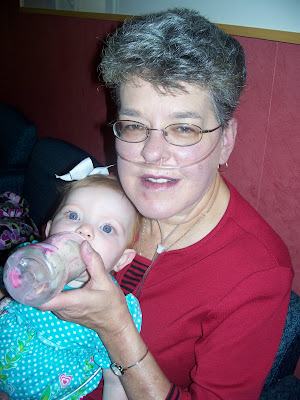 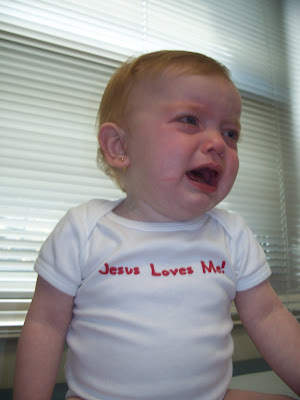 A not-so-happy Lainey! She was ready for everyone to leave her alone! 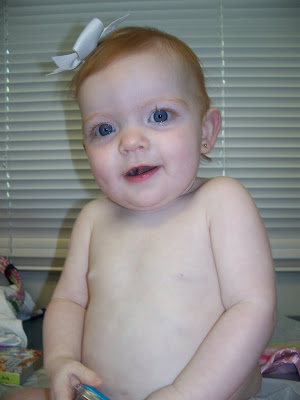 Lainey was a happy girl after everyone quit "bothering"her!

On Wednesday, Logan began PeeWee T-Ball! Although it is called PeeWee, Logan was not so "PeeWee" looking compared to the other children! This team is for 4 and 5 year old boys and girls. Logan just turned 5 but looks like an eight year old out on the field! After practice he said, "Mom I love t-ball and I learned a lot!" Unfortunately Liam is too young to play t-ball. He wanted to play with the big kids so bad that he threw a major fit! When all of the t-ball kids were off the field, my dad (aka Papa the Coach) called him out and told him to run around all of the bases! He was faster than any of the other kids! It was awesome because he crashed when we put him to bed! 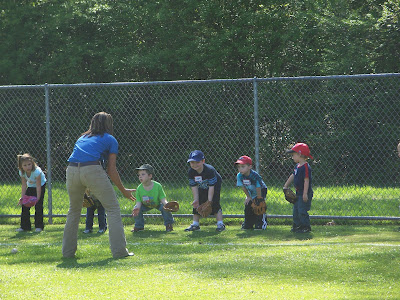 Logan is wearing Papa's blue hat. They were learning to catch ground balls. 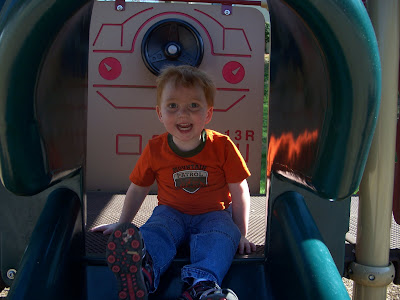 Liam played on the playground while Logan practiced! 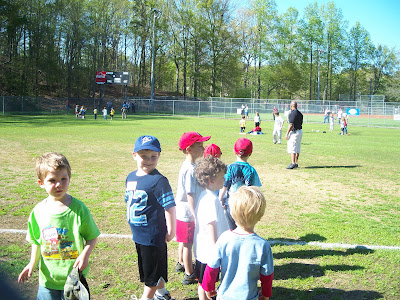 Logan telling his new friends that his "name tag says that his name is Logan, but it is really Peter!" He wants his name to be Peter because he wants to be like Peter Pan!
On Saturday morning the Gainesville Parks and Recreation had their annual T-Ball, Softball, Baseball parade! It took longer to get the teams in groups than it did to see the complete parade from start to finish, but Logan had a blast. Liam and Lainey enjoyed watching their big brother walking in the parade! 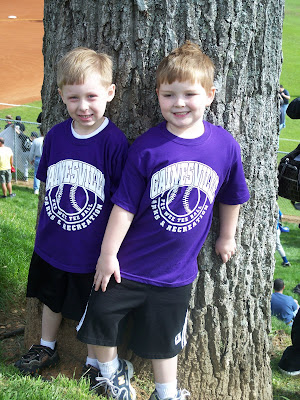 Dawson and Logan at the parade. 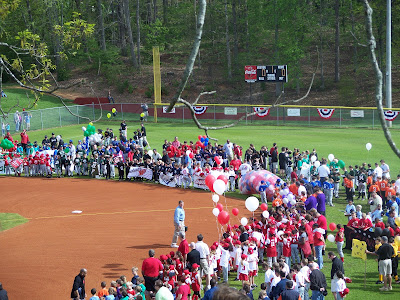 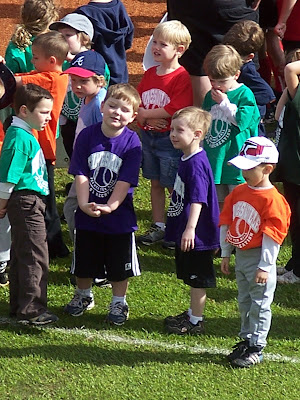 Logan dancing to the music the DJ was playing! 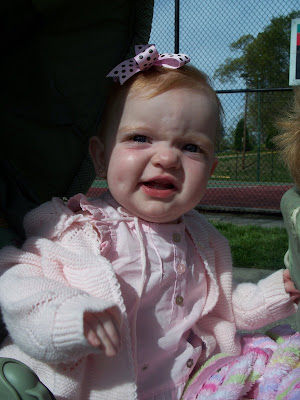 Lainey watching all of the kids!
In addition to the fun time we had at the parade, my mom and I headed to a bridal shower and my dad took the boys to the park. Lainey was the hit of the party! Of course she smiled at everyone and chowed down on the homemade french toast!
This next week brings a lot of fun and not-so-fun things! Not-so-fun ~ CRCT testing! My first grade students will have to take a three hour test on Tuesday, Wednesday, and Thursday. BLAH! It is so hard for them to sit still for that long, since we only get one break in the middle of the test each day. Also, progress reports go home on Thursday, so I have a lot of work ahead! Fun ~ Lainey will be 11 months tomorrow. Time is flying by! Liam's birthday is Friday! I can't believe he will be 3! Liam is also going on a field trip to Elachee Nature Center with his day care class. We have been telling him that he will be able to go to camp this summer at Elachee if he goes pee pee and poo poo on the potty! Hopefully this trip will encourage him to use the potty so I can catch a break with buying diapers! This week also brings a wedding. My brother-in-law's brother is getting married. We love Chris and Kelly and are very excited for the two of them! It seems like just yesterday when they got engaged (although it was really July 4th)! The best thing of all ~ Sid's long clinical days are over! From now until he graduates, his clinicals will be 8 hours, so he will be finished with school Monday through Thursday by 3:00 in the afternoon! Now he will be able to go to Logan's t-ball practice and spend more time with the kids and I.
For now, I am off to my busy week! I will post pictures from our many events hopefully by Sunday!
DeAnn
Posted by The Smithson Family at 10:02 PM

What a great report! I remember when we went from 1 month visits to 2 month visits, and then finally down to quarterly. I was scared! I thought, "I can't go that long without see you wonderful doctor!!!" I will pray for you that the transition will be seamless, and I'm so happy for you that she's doing so well!

Wow...You have had a lot going on!! Looks like fun at the ball field!! So glad to hear Lainey is doing so well. I know you are so happy her weight is coming up and her lungs sound clear...what a blessing!!

It sounds like Lainey had a great clinic appt., altho she didn't appreciate it so much! lol I don't blame her, tho!

You brought back a lot of memories of when Ryan was in T-ball. In his memories of it he was a fantastic player, but I remember that he wasn't very good. That tells me that he had a great time and experience! lol I remember how he'd get preoccupied with looking for bugs in the dirt and forget about watching for the ball!

You must be so excited about Sid's hours cutting back. That will be great for all of you.