Counting Calories and Having Fun!

So......Just how many calories are there in a plastic spoon? 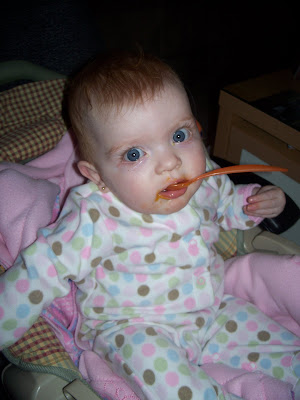 Lainey's new favorite thing ~ eating her spoon when she is tired of drinking formula or eating baby food!

This weekend the boys, Lainey, and I went to the local Home Show with my parents. Our home is fairly new, so I don't really know why I went other than it was an escape from the house! In addition to the escape, it meant that I had two other people helping me with my children for at least a couple of hours. Although one would think the home show would be boring to a 5 year old, almost 3 year old, and a 9 month old, the kids had a blast! They were some of the only, if not the only, kids at the home show. They racked up gathering free "goodies" from each booth! We now have mini flashlights, foam baseballs, potted flowers, notepads, pens, crayons, bandaids, coloring books, candy, and much more! I went to the Home Show several years ago and won a patio table and chairs, so that is always incentive for me. No such luck this year! I didn't win anything, but having a day of entertainment made me feel like a winner! Thanks mom and dad for getting all 4 of us out of the house! We had fun at the Home Show and enjoyed some yummy food at Brad's Grill (compliments of Gigi and Papa)! 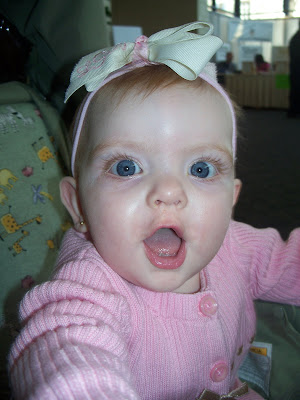 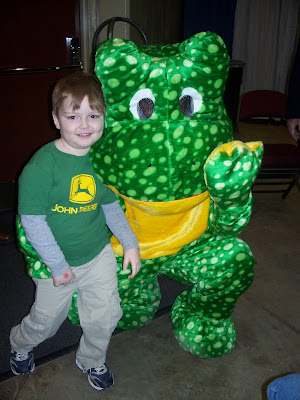 Logan and the frog at the Home Show! 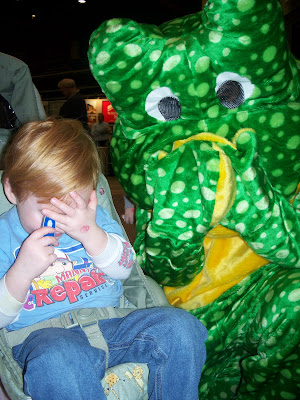 Liam did not want his picture taken....but here he is with the frog!

This week brings several appointments. We were suppose to go to the pediatrician's office and the CF Center last week, but our plans changed. The pediatrician was sick on Thursday, therefore Logan's 5 year checkup and Lainey's 9 month check up were cancelled. We are now scheduled to go this Thursday morning. I rescheduled Lainey's CF appointment because the boys were still under the weather from having Strep Throat. We will be going this Friday for her appointment at the CF Center, while Gigi and Papa go for their checkup at the cardiac clinic at Emory. This works out perfect because we can take one vehicle to Atlanta since the CF Center and Emory are next door to each other. I am also happy we are going the same day as my parents because now I do not have to find a babysitter for Lainey! Since my parents take care of Lainey, when they are traveling, at the doctor, or are sick, I must find another place for Lainey...or take a day off of work. I like being home with Lainey, but I am trying to save my days for our Disney Cruise in October and incase Lainey were to get sick. Thanks to Josie's mom, Kay, Lainey usually has a place to stay when Gigi and Papa are not available!

Please pray for good visits at both the pediatrician's office and at Lainey's CF clinic. We are hoping that Lainey has met our goal of 18 lbs! Check back later this week for updates on our visits! :) 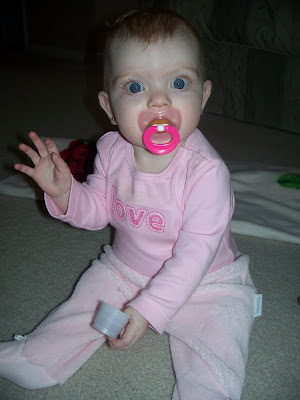 Posted by The Smithson Family at 11:07 PM

Her big blue eyes in the last pic are so pretty!! Hope all goes well with the appts. this week!!

My husband and father went to the Home Builders Show a week ago in Chattanooga. They came home with their goodie bags and were like kids, going on about everything they saw and learned. Glad you all had fun.

I hope all of the appts go well this week.

Good luck on the appts.
I will def check back;)
M