Today, 57 years ago, my mom was born. My mom is truly a miracle. At 1 year old she weighed 10 pounds and couldn't sit up on her own. The doctors were sure that if she lived past her 1st birthday, she would not be able to walk or talk! She was in and out of the hospital her entire first year of life. She had difficulty keeping food down. The doctors told my grandparents that my mom would most likely not make it and they should consider having another child to "soften the blow." My mother came home from the hospital close to the same time her brother was born. She and her brother were over a year apart in age, yet they were the same size. Many people thought they were twins!
Over her childhood, my mother was sick. At one point the doctors told my grandparents that she had Cystic Fibrosis. They began numerous CF treatments, only to discover several years later that she did not have CF.
When my mom was a senior in high school the doctors finally found a hole in one ventricle of her heart. It was determined that her ventricular septal defect (VSD) was unrepairable. Her defect is associated with Eisenmenger's Syndrome. She continued on despite her diagnosis. She graduated from the University of Georgia with a bachelor of science degree in education with a focus on speech pathology. She later went on to get her master's degree in special education.
Due to her health, my mom and dad decided to adopt. After being on the waiting list nearly 7 years, my parents received the call they longed for....a baby was available for adoption. My parents adopted me in July 1980, when I was only 2 months old. Through private adoption, 4 years later, they adopted my sister at a mere 13 days old.
Through the years my mom has been in and out of the hospital numerous times. She has always taken medicine and began using oxygen in 2000. For as long as I can remember, she has had a blueish-purple hue to her face and hands as well as a very distinctive, persistent cough. With the progression of her disease, she has developed secondary pulmonary hypertension. She is also in the early stages of congestive heart failure. Her doctors have had her on breathing treatments, experimental medications, and even Viagra! She was on the list to receive a heart and double lung transplant at Barnes-Jewish Hospital in St. Louis, Missouri, but has since been taken off the list due to her age.
Gigi ~ aka: Diane, Didy, Mom, grandma, wife, daughter, sister (to 4 younger brothers), aunt, teacher, and best friend ~ has WOWed her doctors and has been a true blessing to everyone she meets. She has lived 57 years; some years she has been healthier than others. She taught elementary and middle school for a total of 25 years. She has been a wife to my dad for almost 36 years. She has been an awesome mom for over 28 years. She has been the BEST Gigi for 5 years. She has beat many odds, yet very seldom complains. Every birthday is a huge accomplishment. We are thankful for every moment we get to spend with her.
Lainey is so lucky to have a Gigi that can teach her what it takes to "beat" the odds. To take what the doctors say and prove them wrong! To keep going when the going gets tough. We pray that Lainey will have the same outlook on life as her health is effected by the challenges of Cystic Fibrosis. Lainey has a lot to live up to, but Gigi has been preparing her since birth! Lainey and Gigi are two of a kind....the kind that you could never live without!
Mom, I know pizza and a Dairy Queen ice cream cake may not be the ideal birthday dinner, but we hope you had a great day! Thank you for everything you have taught me. Thank you for all of your love and support. Thank you for your friendship. We hope to have many more birthdays with you. We love you!
With Love,
DeAnn, Sid, Logan, Liam, and Lainey 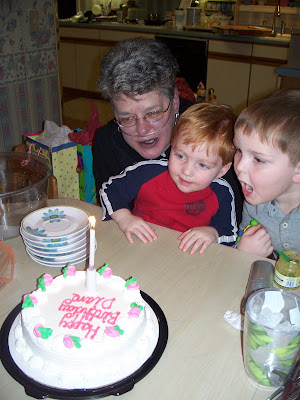 Liam and Logan helping Gigi blow out her candle!

Posted by The Smithson Family at 9:02 PM

What an amazing story! Looks like you have a strong group of fighters in your family! Have a great Friday!
Angela

Your mom sounds like a remarkable woman. It's hard to imagine all that she has been through. She sounds like quite an inspiration!

Happy Birthday to your mom!

Your mom sounds amazing and what a great example for your kids, especially Lainey. Happy Birthday, Gigi!

I NEVER knew that about your Mama's childhood. She really is AMAZING Dee! Tell her happy Bday for us. We would love it if her and your Dad came to Cam's Bday too!

Tell your mom: The Mannings are wishing her a Happy Birthday! We are so glad we had the opportunity to meet your mom weeks ago. From the day we met her and later put a name to a face, I knew that your mom was very special. Thanks for sharing this story. Blessings to your Mom, Dad, and Your Family! The Mannings

What an amazing woman!! What a great example for us all!!
Thanks for sharing and Happy Birthday Gigi!!
M